At my cousins’ apartment in New York City, I was in the bedroom talking about Bobby Sherman. My cousin Lucy was trying to explain why he was so good. She said it was part his voice, and part the songs he sang, but mostly his personality. She played me one his songs as she showed me a picture from one of her magazines. “You can see it, right?” she said. “You know he would be so nice, if you met him and talked to him.”

My brother and my cousin Eileen were in the bedroom, too, watching television. Eileen yelled to turn it off when Lucy played the Bobby Sherman song, even though Lucy played it really low so it wouldn’t bother them. I wondered if it would have been worth having to share a bedroom with my brother if it meant we could have our own TV in there.

“I think my friends would beat up any boy who wore that necklace thing,” I said to Lucy, as I looked at Bobby Sherman’s picture in her magazine.

Lucy tsked. “It’s called a choker. And it looks good on him. You’re just making fun.”

We heard the door of the apartment open, which meant our Uncle Mike was home. We all went to the kitchen to say hello. We knew Mike would be mad if we didn’t.

Our mothers were in the kitchen with their friend Ed, who lived in the building with his sick mother. We’d been hearing their whoops of laughter from the bedroom. Ed was the kind of person who could make anyone laugh.

Uncle Mike nodded hello to us all, pulled a chair from the kitchen table, turned it backwards and sat down. “How are you doing, Mike?” Ed asked.

Uncle Mike was supposed to work as a bartender. But even I knew he had strange hours for bartender. Sometimes he worked in the middle of the afternoon, sometimes the middle of the night. Whenever we visited Lucy and Eileen, he was always just showing up. He never came along when my aunt and cousins visited us in Monroe.

“You all staying over tonight, Eileen?” Uncle Mike asked my mother.

Everyone always acted like this around Uncle Mike, kind of nervous. Which was funny, since Mike was a short, wiry guy, not someone you’d expect people to be scared of.

“That’s fine,” Uncle Mike said, and stood up abruptly. “You know, I think I’m going to take a shower and a nap. I really am beat.”

“No, no, stay,” Uncle Mike said. “You know me. I can sleep through anything.”

Uncle Mike walked over to the refrigerator, got himself a beer. He paused for a second in the kitchen doorway. “Okay then, enjoy it, anyway” Uncle Mike said, and laughed to himself.

That was another thing about Uncle Mike, he was always saying weird little things that made no sense to me but he thought were really funny.

Once the shower water started running everyone calmed down. We kids went back to the bedroom. Our mothers and Ed began telling stories again.

About a half hour later I had to go to the bathroom. “Hey,” a voice called out as I passed the living room. “Hey, Chris. Come in here for a second.”

It was Mike. He was in the living room with the lights out, sipping on his beer. I came in, sat on the far end of the couch.

I said yes, although I didn’t know how he’d know if I liked music or anything else. We never talked much.

“I heard this on the radio today. I had to go out and buy it.”

He took a 45 record out of a plastic Korvette’s bag. “Just listen to this.”

He put the record on the turntable. It started out with guitars that sounded like the country music my father listened to, but then a deep, sad voice began singing words that were nothing like any country music I’d ever heard:

Yesterday, when I was young
The taste of life was sweet as rain upon my tongue
I teased at life as if it were a foolish game
The way the evening breeze may tease a candle flame….

As I sat on the couch listening, I watched Uncle Mike. He stood at the record player, his ear dipped toward the speaker, getting closer and closer as the song went on. It was like he wanted to crawl inside.

“Isn’t that great?” he asked, when it ended.

He restarted the record. Again, he listened with fierce concentration. At the end, he shook his head, then looked up at me as if waking up from a dream. “You don’t want to be here,” he said. “It’s okay. You can go.”

As I walked away, I heard him cueing up the record again.

I went to the kitchen, where there was light. Ed was telling another story. Aunt Julie was laughing, my mother was laughing, which wasn’t something she did very often. Ed paused long enough to say, “Lose your way somewhere, Chris?” which made everyone laugh even harder. Then he picked up right from where he’d left off.

I sat down at the table. I was relieved to be back here, away from Uncle Mike and that dark living room. This was where I belonged. But then how to explain how badly I wanted to hear the song Uncle Mike had played for me again?

RIP Roy Clark. Never much of a Hee Haw fan but I’m sure it made a lot of people very happy. 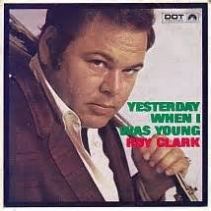 Which is by the way a word I first encountered in Greil Marcus’s “Mystery Train,” when he referred to Randy Newman as the “master of ambivalence” or “poet of ambivalence” or some such. I had to look it up. To this day I’m not sure how it applies exactly to a song like Randy’s “Old Kentucky Home,” which seems pretty singleminded in its skewering its target…though whether that target is rural life or songs about rural life is an interesting discussion. And while we’re on the subject, did you happen to catch Greil’s recent article about how the new Bob Dylan “Blood on the Tracks” outtakes aren’t really any good despite how good they sound? Recondite even by his own high standards!

But I digress. So: ambivalence, “mixed feelings over mixed drinks,” in Tom Waits’s clever phrase. Soulman Leon has finally found a woman who “might just be (his) everything and beyond” (he even throws in a second “beyond,” she’s beyond beyond!) but he’s not sure if he’s getting, well, beyond himself.

An argument for that could be made: he is already projecting marrying her, having kids, having her as his eternal companion in the afterlife. That’s a lot to take on!

But he’s also reluctant about being reluctant: “Do you think I’m being foolish if I don’t rush in?” he asks us. Sorry, Leon, you’re going to have to answer that one yourself.

Which he does, by the end of the song, admitting to himself he’s in love but casting it in terms of “giving up.” That checks the boxes in my definition of ambivalence much better than Randy Newman did.

Love the strummy guitar, the background vocals, the multitrack main vocal. Sounds great on the radio. Bound to show up at many future weddings.

Amanda Shires multitracks her twangy voice on “Leave It Alone” too, and sets it against an almost techno drum-machine bed. I love it, but don’t think it would sound good on the radio.

No nicer way to put it, this is a song about being in heat, infatuated, obsessed…but not doing anything about it. It’s not clear in the context of the song why she doesn’t do anything about it. She talks a lot about what she intends to do about it, but it’s all future tense. There is a touch of Leon’s fear of intimacy–“Careful, you’re getting too close”–but she is also envying the clothes the song’s object is wearing (no gender specified, let’s say guy to avoid labored constructions like that) for their proximity to his body. She can’t leave it alone–“it” being him, or maybe lust itself–but it’s unclear why she would have to. Just go for it, Amanda!

Some great images in here: the hands in places they’ve never been because they have a mind of their own, the noise of the guy’s nerves like question marks, the words they are not saying like swarming bees, the neglected fish tank green in which this either hopeful or doomed encounter is taking place. If they make it to morning, Amanda says, that fish tank green will turn into cold blue. Again, and notwithstanding some of the jagged relationship songs on the rest of the album, it seems a chance worth taking.