For the last few summers in addition to our usual vacation packing list (sunscreen, blankets, bottle of Rioja) we’ve purchased a commemorative oldies CD, the poppier the better, preferably by a band we know only by one or two big hits. We play it on the ride down and then constantly as we shuttle from house to beach to restaurant to outlet store. (Our vacations seem to involve a lot of outlet shopping.) Past years have included: the Turtles, the Grassroots (underrated), the Cowsills (not underrated but still fun), and the Left Banke (not beachy enough but you can play “Walk Away Renee” at my funeral).

This year we didn’t do a beach vacation but instead spent the week touring colleges, accumulating data points for what will turn out to be the second-most expensive single purchase of our lives after our house. (I’m not anticipating a Tesla in my future.) But we still found a few minutes to stop in a great record store called Bull Moose in Brunswick, Maine, where we picked up a compilation by the Box Tops.

(An aside about compilations: they are better shorter! Those 20th Century Master CDs that give you the one or two big hits and then the eight or nine lesser hits, those are perfect, a half hour and you’re out. There is no need to include the ambitious side two experiments or the songs that someone from the record company forced the group to cut because the writer was a relative. All of which to say, this 18-song Box Tops compilation is okay, but a 10-song Box Tops compilation would have been killer.)

Anyway, “Cry Like a Baby”is the best song here but “Soul Deep” is the one I’ve had on repeat play during my commute, perhaps because I’m less familiar with it. It’s the last of the Box Tops charting hits, from 1969, and is typical of their blue-eyed soul approach, the horns, the plucked guitar, something a little fuzzy and messy about the whole thing. The vocal is great, Alex Chilton doesn’t sound like he’s trying too hard as is the case on other Box Tops songs, and the lyric has the shambling, thrown-together feel of someone struggling to find words to express an inexpressible joy:

I worked myself to euphoria
Just to show I adore ya

What does that even mean? “Soul deep,” though, that means everything. Did the phrase exist before this song? The Internet hasn’t been able to answer that for me.

(An aside about Alex Chilton: I don’t totally get him. I have listened hard to Big Star because bands I love have noted them again and again as an influence, and there are great songs there, but none I’d trade for the Replacements or REM or even Matthew Sweet’s best. And the Chilton solo stuff is self-indulgent and forgettable. RIP, or course, and thanks for inspiring those bands I love, but in this case I’ll take the ones who came along later and did it pretty over the genius who did it first.)

So let me bring this full circle: Alex Chilton was a whopping 18 years old when he recorded this, which begs the question of whether an 18-year old has any idea of what it’s like to love something soul deep. But I reject that question because if he can make me believe he does then I am happily along for the ride. Or maybe it’s just that after spending a week listening to 18-year olds telling me why I should spend $65,000 a year on the product they were selling–while walking backwards, no less!–I am in a vulnerable place to submit to the authoritative voice of youth. 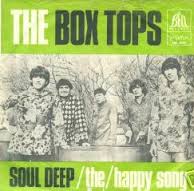